Hey Smashers, it is SMASH LEGENDS.

The following changes will be in place after the June 22nd (Tue) update.

Find out more below! 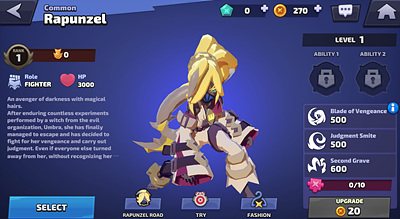 A fighter legend who is a game-changer with a unique wide-area attack.

Transforms hair into a sword to attack foes in front, dealing damage.

Attack foes on the ground 1 time when used as Aerial Skill dealing damage.

Transforms hair into a flail to smite foes, dealing damage and stunning the hit foes.

Fires strands of hair in 5 directions. Deals damage when the foe is hit by the hair,

🌟 Rapunzel abilities (Based on Level 1)

Increases Ground Skill damage by 18%, and stuns the target for additional 0.5 s.

Increases Skill damage by 8%, and instantly resets Skill cooldown upon smashing a foe with a Skill attack.

Increases damage of Ultimate by 6%.

Restores HP by 150 after hitting 2 or more foes with a Ground Skill.

Applies the Ultimate Hit Effect to the foes hit by Basic Attack for 5 s after smashing or causing a foe to ring out.

🌟 How to obtain Rapunzel

Rapunzel can be unlocked by achieving 1,050 medals at Medal Road. 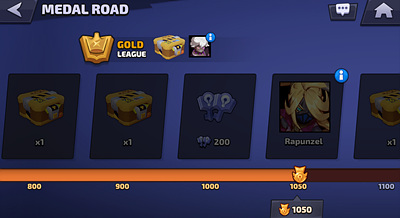 ■ Addition of a New map

- After the new map addition, Arena takes turn as below.

“Night has come to the Flying Trunk. Fight against foes and win in this battlefield!”

After a magical time, the night has returned.

Though this mode has the same rules as general Team Deathmatch, the space is narrower than previous maps.

We aimed to have more engaged and faster combats. You can enjoy faster and more intense team Deathmatches! 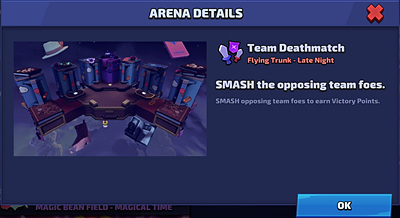 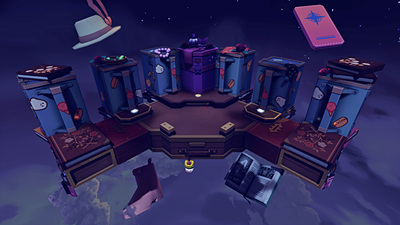 - ‘Ravi’ and ‘Master Cat’ legend products are added to the Dream Shop.

: If you already have the legend, the products will not be displayed. 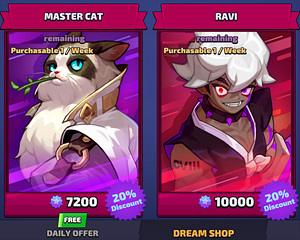 - 'Dream Skin Box III' is added to the Dream Shop.

: You may obtain one of the below skins.

- After the update, packages will be displayed in Shop depending on the period.

[i] Brief comment about Balance: Adjusted the combo attacks to be smoother

depending on Cindy's attack position and timing.

: The amount of second ground attack that gives foes the inability to move is slightly reduced.

: The knockback amount of aerial attacks is slightly reduced.

: When using skills on the ground, the amount of knockback according to the time of hit has been adjusted

to be divided into four stages from the previous three.

The target's knockback distance has been changed to be more consistent.

[i] Brief comment about Balance: Don Quixote is a legend who tries to stay

where he is and counters the foe's attack.

However, the Shied does not seem to be working as intended.

So, Don Quixote gets a buff to do his part better.

: Reduce the time it takes for the first ground attack.

: When foes are hit by the first ground attack, the duration of inability to move gets increased.

: Adjusted the ground combo attacks to be smoother.

: Upon using Aerial Skill, Super armor status gets triggered even before landing.

[i] Brief comment about Balance: With the previous patch, Ducky and Swan got a buff when in Ducky status

which allowed the legend to actively participate in battles.

However, this made it easier for Ducky to transform into a Swan than before,

making it difficult to feel the dramatic reversal of the game.

Changed to make it slightly more difficult for Ducky to transform into a Swan.

: The range of ground skills is slightly reduced.

[i] Brief comment about Balance: Adjusted Ravi's ground-attack streak to be connected better,

and changed where too little delay was applied after the third ground attack.

: The knockback amount of the first ground attack is reduced so that the hit foes will now get floated lower.

: The range of the second ground attack is slightly increased as well as the amount that gives foes the inability to move.

: Increased the attack range of the third ground attack.

: The knockback distance increases when foes get hit by the third ground attack.

: The delay after the third ground attack is increased.

[i] Brief comment about Balance: Red enables you to do a surprise attack with her stealth ability and fast mobility.

However, with the recent nerf on her, it makes her difficult to make use of the advantages.

Red gets a buff so that her stealth attack to be more effective.

: Slightly reduced the foe's inability to move by her second ground attack.

: When using a skill, the attack activation time and attack end time are slightly reduced.

: Adjusted for the second ground attacks to be smoother.

: When using aerial skills and dealing damage to foes in the air,

the knockback distance is adjusted to be consistent regardless of his HP.

Now you can check the dream shop even if you don't have the dream piece.

- If you are playing with a party, the matching time will be increased slightly more to find a match with a more similar level.

- The legend is located closer to the center in the fashion effect item preview screen.

- Added a function to open related links when clicking a banner in the pop-up banner.

- The text ‘Invite to Team’ has been added to the team invitation button on the lobby screen.

- Fixed an issue that caused the hit point display effect and the actual hit point to be different when using Cindy's Ultimate.

- Fixed an issue where Don Quixote bounced upwards when caught in the obstacles during his first attack.

- Fixed an unnatural animation when Don Quixote does a hanging attack.

- Fixed an issue of Dont Quxote slipping during a hanging attack.

- Fixed an issue that caused the bullet effect to be displayed wrongly when Hook's third aerial attack hits foes.

- Fixed an issue where 'Crayon Heart' SMASH effect location was displayed wrongly when Kaiser equips them.

- Fixed an error where the effect was not applied depending on the hit during Ravi's third ground attack.

- Fixed an issue where Snow bounced upwards when caught in the obstacles during his third ground attack.

- Fixed an issue that caused 'in Game' to be displayed in the friends' window even when offline.

This happened when trying to force close game during the battle.

- Fixed an issue where the game does not proceed when lost in tutorial battles.

- Fixed an issue where the animation was sometimes not displayed at the start of a battle.

- Fixed an issue where the timing of displaying the map at the start of a battle was not always correct.

- Fixed an issue where some of the Ability Box UIs were not displayed properly.

- Fixed an issue where the lobby UI was shown as blank

when account information could not be loaded due to a network error.

- Fixed an issue where the results of custom matches were counted on profile status.

- Fixed an issue where legend does not immediately get smashed when in jump pad.

The above issue can be changed due to an unexpected issue.