Hi, this is SMASH LEGENDS.

The following changes will be in place after the July 6th (Tue) update.

Please refer below for more information.

🌞 Addition of a NEW Legend 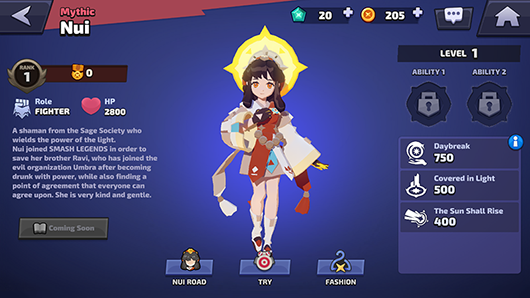 Nui is a fighter legend who dominates the point by planting a pool of lights and unleashing a powerful anti-air attack.

Attacks with solar energy to deal 200 damage to foes.

Creates 3 projectiles around Nui when used as Aerial Attack.

Creates a pool of light on the ground.

The pool fires rays of light against nearby foes.

Rays that fall from the air deal 500 damage.

The pool lasts for 3s.

3) The Sun Shall Rise (Ultimate)

Focuses all power to fire 4 rays of light forward.

Each ray of light deals 400 damage.

🌞 Nui Abilities (Based on Level 1)

Decreases Movement Speed of foes hit by Skill attack by 12% for 2s.

Increases Basic Attack damage by 10% when Skill is not available.

🌞 How to Obtain Nui

- Once you purchase the SMASH Pass Season 4, you can obtain the legend, Nui, as the 15th reward.

- Once the SMASH Pass Season 4 ends, Nui can be obtained from Gold Box and higher grade.

- Once the SMASH Pass Season 4 ends, Nui can be obtained from Special Box and Super Special Box in the Shop.

- After the update, a new event Pop-Up Store will start.

: Complete up to 4 missions a day to get legend coins that can be exchanged for rewards of your choosing! 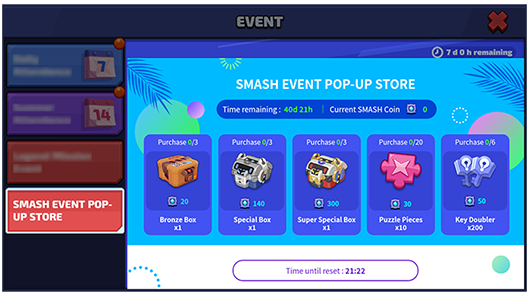 - After the update,  ‘Summer Attendance Event’ will be available for 14 days.

: Click the event button and participate in the attendance event for 14 days!

: For more information, please refer to the event announcement. 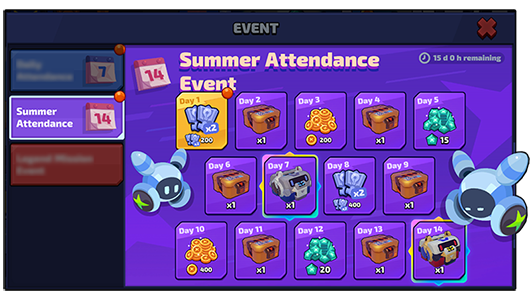 : When you enter the SMASH Pass screen for the first time, the new season notification page will be displayed.

: You can get various items such as skins, profile icons, and fashion items by completing SMASH Pass missions.

: New legend, Nui, can be unlocked when you purchase the SMASH Pass and reach the 15th stage in the paid pass track. 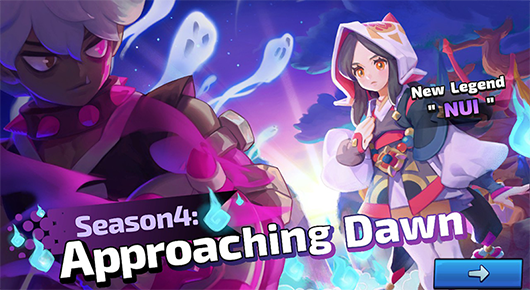 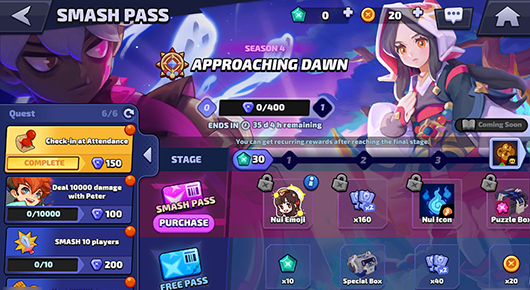 - Once you purchase this season’s SMASH Pass, you will get the following benefits.

: Nui is available when you reach the 15th stage.

: During the SMASH Pass Season 4, the Quest Limit is increased from 6 to 9. 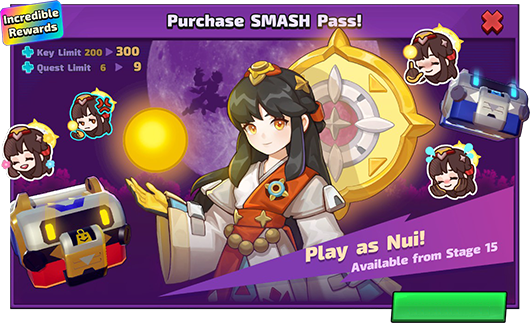 - At the Dream Shop, two legends, Snow and Witch Queen are added.

: If you already own those legends, those items will not be displayed.

- At the Dream Shop, Peter Emoji Box and Red Emoji Box have been added.

: From July 6th to July 12nd, Peter Emoji Box is available to purchase with 400 Dream Pieces.

: From July 13th to July 19th, Red Emoji Box is available to purchase with 400 Dream Pieces.

: When you click the SMASH Toon button in the legend page, you will be directed to the legend’s SMASH Toon page on the FLOOR site.

(In the case of a legend without a SMASH Toon, you will not be able to see the SMASH Toon.)

: When you click SMASH Pass Toon button in SMASH Pass window, you will be directed to the season’s Pass Toon on the FLOOR site.

(In the case of a SMASH Pass without a Pass Toon, you will not be able to see the Pass Toon.)

- Based on the number of medals for each legend, the reset amount and rewards will change.

: Upon the medal reset, you will get Dream Pieces depending on your number of reset medals.

- If you are entitled to medal reset, a profile icon will be provided as a seasonal reward.

(For those who have previously obtained the profile icon with the first season reset, you will not receive a new one.)

- For those who made the TOP 500 worldwide ranking, a special profile frame will be rewarded. 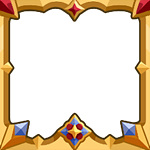 - Third Season will be started.

: After medal reset, legend roads and medal roads will display your current number of reset medals.

: The highest medal record you reached previously will be displayed in legend roads and medal roads.

: The current medals in medal roads are the total number of each legend's reset medals.

: Even if the medal league is lowered after the seasonal medal reset, the league box will still remain as the previous season.

ㄴPreviously: If the score was the same, the result would be a draw.

ㄴAfter change: If the score is the same, the team with the higher HP among all crown players wins the game.

If the score is the same and the crown players of each team have the same HP, it will be a draw.

[!] A brief comment about the balance: Jump is too powerful as it easily enables players to dodge attacks from foes without any risk.

Therefore, jumping has been disturbing the flow of battles and made legends too easy to run away from the foes.

As a result, landing from jumping has been delayed, so that jumping can be used more carefully and strategically.

: All legends’ landing time will be increased slightly.

: Landing time will be slightly increased when attacking in the air.

[!] A brief comment about balance: Alice's stun ability will be improved, and the high combat power will be slightly decrease.

: After all mines are triggered, the waiting time for the explosion will be greatly reduced.

: The mine knockback amount of [Move Aside!] and [Mine Bombardment] will be reduced.

: [Mine Bombardment]'s tooltip is improved.

ㄴPreviously: Damage was affected by the damage increase from leveling up the legend.

[!] A brief comment about balance: Don Quixote's counterattack ability has been increased to make it easier to use.

[!] A brief comment about balance: Due to increased landing time, the ranged legend will be adjusted accordingly.

: The capability to fire a projectile in a row will be slightly reduced.

: Hook's number of bullets per ground basic attack is reduced and the damage is decreased.

We are aiming to reduce the player's stress which is caused by Hook's long attack duration.

: Due to an increase in landing time, the ranged legend will be adjusted accordingly.

: Fixed an issue where some of the attack range was too wide.

: Hook's number of bullets per attack is reduced from 8 bullets to 4 bullets.

: Target attack range will be based on a lower location.

: Ultimate hit judgment is adjusted to be consistent.

: There were many comments about Peter's rare ability being too weak considering the rarity.

Adjusted to be more strategic by adding a function that pulls foes hit in the middle.

: The interval between hits of the Ultimate is slightly faster.

: When using rare ability [Earth Roaring Sword] as an aerial skill, a shock wave that pulls in foes is added.

: Tooltip of the rare ability [Earth Roaring Sword] is improved.

ㄴPreviously: Damage was affected by the damage increase from leveling up the legend.

[!] A brief comment about balance: Rapunzel's attacks will be linked better.

: The stun time of slamming the ground attack will be increased.

[!] A brief comment about balance: Snow is a legend who can narrow the distance and give significant damage to the foes.

However, it seemed too challenging to achieve his potential because it had been difficult to create a favorable condition for Snow.

The basic combat capabilities is improved for better performance.

[!] A brief comment about balance: Due to an increase in landing time, the ranged legend will be adjusted accordingly.

- Matchmaking is improved so that the actual players can be matched first.

- For a team-based arena, matched player's number of medals will be similar to one another.

(However, there may be differences in medals within the team.)

- A notification pop-up is displayed when kicking a member out in the friendly match.

- Invincible status that gets triggered upon starting an Arena match is now removed.

- If there are more than 3 rewards that you can receive, you can now claim them at once with a new button, Receive All.

- Added a quick access button where you are directed to this Season's main SMASH Pass rewards.

- Custom keys for the PC version are added

: In [Setting] → [Control], the Custom Key function has been added in addition to the previous keys.

: You may now set up keys as a movement key, and an attack button. 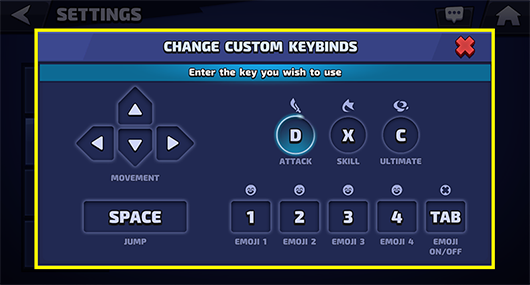 - Fixed an issue where the effect of Ravi's ground skill is fired in the wrong direction.

- Adjusted the timing of effect generated from Ravi's aerial skills to match the hit judgment.

- Fixed an issue where Hook buffs did not disappear even when Hook is defeated while equipping Hook's rare ability.

- Fixed an issue causing Skill's UI to be activated right after coming back to the Ducky form.

- Fixed an issue where the MVP screen was skipped when wearing some of the skins.

- Fixed an issue where level-up animation was not triggered upon leveling up a legend.

- Fixed an issue where the defeated team was displayed as a winner in team battles.

- Fixed an issue where animation was not triggered at the start of a game in the 'Duel' arena.

- Fixed an issue where headlines are colored in blue as a winning team when in placed as 3rd and 4th rank.

- Fixed an issue where legend defeat UI was exposed and remained when foes are ringed out in 'Battle Royale'.

- Fixed an issue where certain sections of the tutorial did not progress.

- Fixed an issue in which the reward appears to have been received at the end of the friendly match.

The above contents may be changed due to an unexpected issue.